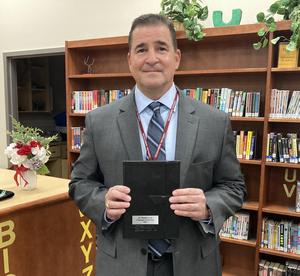 An unsuspecting Basile was called Wednesday morning into the Lexington Two middle school’s media center, where SCASA Executive Director Beth Phibbs surprised him with the award. Lexington Two and Pine Ridge Middle School administrators, along with members of Basile’s family, attended the event.


Basile has been in education for 36 years, serving the past five as principal at Pine Ridge. He started his career as a teacher at a California high school, and has since served in a number of principal and administrative roles in districts near and far, promoting a culture that makes all students feel welcome and included.


Earlier this year, Basile was named Principal of the Year by the South Carolina Council for Exceptional Children.


Basile said successful middle schools are places “where children are known by name and are appreciated for who they are as their unique individuality and talents are developed. It is also a place that parents and the community trust and where the staff feels supported.”


Phibbs said of Basile, “He is an innovative leader who has created a culture of excellence at Pine Ridge Middle School which is rooted in respect and a sense of fairness."


Basile, who was selected for the SCASA award from a statewide pool of candidates by a panel of veteran judges, said his leadership philosophy is simple.